For the Younger Set

Have you exhausted all the “fun” summer activities for the littles? It might be time for some new books! One or two of these recent releases from Elk Lake might be just what you need to answer that age-old question: What can I do now?

Choose from: From Hair to There by Cindy Lurie, The Rubber Band Stretches by Christy Hoss, Into the Great Marinara by Nicolas Day, Hidden in Light by Matthew Weigelt, Written on Our Hearts by Ken Wilson, Secrets in September by Doreen McAvoy, The Teen Who Heard a Secret by Marsha Wright, Adam Plus One by Teresa Joelle Krager, Sneaky Serpent by Kristen Lehr, or Eat God’s Food by Susan Neal. Join the travelers as they cross this most unusual and exciting bridge. Stop to see wondrous sites along the way.

Learn of new culture, and experience amazing adventures. But, look out for a very sticky situation that may bring everything to a halt.

Though written for children ages 6-10, From Hair to There is a fun read for all. Foster kid Rocky “Roadkill” Espinosa, drummer for the Rubber Band, chooses Elvis for his 4th grade living biography report. With little money to create a costume, Rocky believes he’ll be the worst Elvis impersonation ever, destined to fail.
When his ex-con father Eduardo, sneaks into his life demanding attention, Rocky’s best friend and lead guitar for the band, Eddie, comes to his rescue. Eddie involves the entire band in Rocky’s protection to be “secret service” and comedic chaos erupts.
After the Rubber Band performs its first set at the mayor’s 50th birthday party, Rocky mysteriously disappears. The band realizes it’s no longer about fun and games. Friends and family are what matter most in life. The bond of the band demands that secrets be revealed.
Will friends, foster or blood family win the battle for Rocky’s future?

Tanner loves baseball, but he’s not a big fan of being bossed around by those in charge: his parents, his baseball coach, God—who, if he exists, surely doesn’t have time to spend on a small-town middle-schooler.
But Tanner finds his world rocked when he is sucked into a bowl of leftover spaghetti and shot into a land of talking pasta who carry swords and spears—all of whom believe in a mysterious higher power they call “Chef.”
Their world is under attack by a giant spaghetti dragon, and they seem to think Tanner is the one sent to save them. Tanner is faced with hard decisions.
Is this “Chef” actually God, and does He really exist? If so, is Tanner going to act according to his own devices to find a way home, or put his faith in the master recipe-maker and follow his cooked-up plan.

Matt Barnes is back … and the action comes with him
Matt Barnes had orders to follow the salt train and to not get caught. He failed. But he nabbed a valuable salt block. After an innocent visit, he connected me to a rare metal found in the block.
Scientists and researchers wanted the element —an essential part in developing an advanced cloaking device. Extreme measures had already been taken to seize the salt blocks, and soon my connection made me invaluable in obtaining the balance of the material required. Who is the Signmaker, and how can he make such perfect signs? The boy decided to find out for himself. That’s when everything changed in his village, his home, and his heart.

Children and adults alike will delight in this story filled with colorful illustrations and a message that resonates with the longing of every heart.

Will was looking forward to eighth grade.

Will he even make it past September?

Will Abbott expects his eighth-grade year at Fern Valley Middle School to be the same as the last seven—school, soccer, and lazy Saturdays. But when a rash of crime strikes his little town, it doesn’t take long to realize something peculiar is going on. Will is certain the class bully, Beefy Boris, is involved and suspects he’s getting help—from their own classmates! As Will and his friends investigate, they stumble upon clues leading them to suspect someone even more sinister is responsible. Can Will and his friends—including a new girl with a mysterious past—trap the criminal mastermind and reveal a secret that has haunted Fern Valley for twelve years?

Fitting into an American high school is challenging for anyone, and doubly difficult for Bilquis.

As an immigrant from Iran, everything is strange including how classmates dress, what they eat, and the language they speak. That’s why when she overhears men speaking her native Farsi, she eagerly listens to the familiar words. Shocked, she realizes they are discussing a dangerous plot against her new homeland. Do they know she heard them? What can she do to keep many people from being hurt? Who can she trust with this terrible secret?

In the beginning, creation was all “good” … until God announced Adam’s situation was “not good.” Join the rhyming romp as Adam’s search for a compatible companion leads him beyond scales, fur, and feathers, back into the hands of his more-than-capable Creator.

A blend of Scripture and smiles, Adam Plus One gently portrays God’s perfect plan—the partnership of woman and man.

Supplemental activities and lessons are available at teresakrager.com.

The Sneaky Serpent is a Christian picture book retelling an Old Testament story dating back to Genesis. Read about the unfortunate temptation of Adam and Eve in the Garden of Eden. The Sneaky Serpent is told in a unique perspective of spiral language and bold imagery to help children of all ages understand the biblical significance of following God’s will.

The Sneaky Serpent blends a special combination of sight word development, repetitive language and predictable patterns for children to enjoy. The Sneaky Serpent also places a primary focus on prayer and obedience toward God. Inspired from: John 14:15 If you love me, keep my commands.

Children will learn a simple prayer and the importance of hiding God’s word in their heart. You don’t want to miss this next adventure in the Heavens Heroes series. 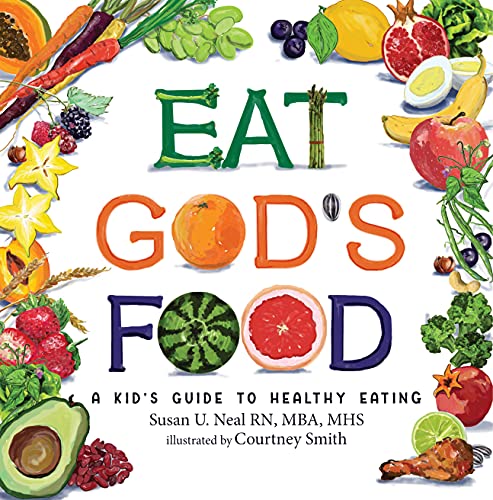 Kids have strong opinions about food. Some foods they love and others they don’t. Instead of letting their taste buds rule over your family’s food choices, teach them early to love the right kinds of food. Healthy food can be fun!

Every good thing we need to grow strong and healthy, God created for us to eat. A body needs different foods to grow and work well. Eat God’s Food teaches kids what foods are healthy and unhealthy, preparing them for a lifetime of eating and living the way God intended.

In Eat God’s Food, you’ll find healthy activities and cooking adventures to ensure kids not only learn but have fun too. You and your child will learn together through fun yet educational activities.

As kids begin to grow, they need to learn to care for their body to become healthy adults. Help your child discover how to eat foods from each of God’s food groups (vegetables, grains, fruits, nuts, seeds, and meat). Eating a variety of colorful food is healthier. Your child will learn how to become a healthy kid and grow into a healthy adult.